How Innovation Affects Engagement in the Television Industry

Throughout the past decade, we’ve seen a fight of innovation vs. television industry, and innovation has won every round of this fight so far! The popularity of online video is spreading like wildfire, and a lot of families don’t even watch television anymore. Networks that have based their model around providing linear broadcasts at set times are struggling to stay competitive with services like Netflix and Hulu. Those that are competitive are changing their models to meet this new demand. Look at HBO for example. Their model is based around linear programming, but once the online video trend hit, they created a channel app that offers their programs “on-demand.”

Live streams are overtaking news networks. When there is breaking news, people find a live stream online to see it. Even NASA has an online 24-hour channel. 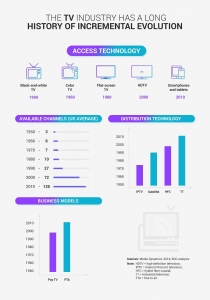 The entire process of producing and distributing data is changing as the world evolves. As a result, we’re seeing user roles change as well. In the past, viewers were at the mercy of networks as to what they could watch but now consumers are in complete control. We all want to watch what we want when we want, and on whatever device we want. It’s an entirely consumer-driven market now. Networks that do not give consumers precisely what they want are going to struggle.

However, that’s not the only challenge in the struggle of the innovation vs. television industry. Behind the scenes, companies are struggling to find the right balance. Not only do they have to meet the demands of a growing audience, but they have to find the right price structures and content. The area that most companies struggle with is that they are focusing on past trends rather than looking to the future. Let’s look at some examples of media innovation that we’ve already seen. You’ll be able to see the consistent path that the television industry has taken. 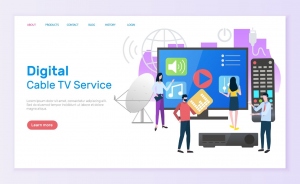 What Will be Next?

Right now, we’re seeing people unsubscribing from their expensive cable and satellite television services in favor of less expensive options like Netflix. Not only are these services much more affordable, but they also put viewers in complete control over what they watch. So far, here are some things that we’ve seen:

These are just some basics though, so let’s look some more advanced changes.

If we look to the past, we’ll see that when television was first introduced, most businesses did not understand how to capitalize on it. Radio shows stayed relevant but as storytelling techniques evolved, radio popularity started to fade. Today we are seeing this same type of transition in action. Only now it’s a shift between traditional television and multi-screen experiences. People can view multiple screens at the same time, so storytelling is starting to evolve. Celebrity Live Tweets during shows is a popular example. Now we’re seeing tablet experiences being added to shows so that users can feel more involved.

The business takeaway from this is that viewer engagement needs to be measured across multiple screens and platforms. This provides a unique opportunity for ad placements and can provide benefits to businesses. 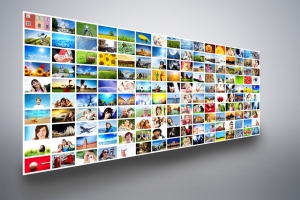 Innovation Will Lead the Way Towards Program Discovery

Here’s something that passes by the attention of most people. We are all so distracted by flashy new televisions with crystal clear clarity that we haven’t even noticed that the remote and channel searching experience hasn’t changed in decades. We still must use our remote to navigate “channels” to find something to watch. However, some companies are starting to create innovative ways for viewers to find programs. For instance, Netflix uses artificial intelligence and analytical systems to provide viewers with recommendations based on their watch history across multiple devices.

Content providers must follow this example if they are to stay competitive moving forward because the traditional channel searching approach is frustrating. Businesses should also use these same breakthroughs to gather data for ad placement and discover what type of content viewers prefer.

Innovation in Television will Continue to Grow
Businesses are already hiring a record number of video editing services to match their need for more content. As innovation in television continues to grow, we will start seeing more providers creating trends in reaction to viewers’ ever-changing demands. The future will hinge around the Omni-screen experience so businesses will have to adapt to this new mindset.

Bingeing Will Change the Way We Measure and Personalize Television Ratings
As streaming services have taken their top place in the industry, we see viewer’s bingeing their favorite shows. This is not going to change so businesses will need to adapt the way they measure ratings. By using data analytics, broadcasters can provide the right packages to the right viewers. Businesses can also use this data to package the right advertisements for these varying types of bingers.